Hello there once again.  You may notice I haven’t been adding expansive reams of content here, but I assure you I have been spending plenty of time making music.

Amongst a few things I have a new little project called ‘the ship shape’ which is an outlet for making quirky dancing music without vocals. It’s pretty fun.

Here are the first two of those:

I haven’t stopped with Birds in Branches though. Not at all. Shifting focus back here to finish some more new stuff soon with refreshed vigour.

And thanks to all who keep reminding me to play some shows. I hear you, I really do.

New Music – Is There A Song

So here is a new song.

It is for (and kind of about) music lovers.

New Song – ‘I am the branch’ Live Preview

I’ve been working on some new stuff lately, here’s a quick live preview of one of the latest songs ‘I am the branch’.  Hope you enjoy the newer sound, much more synth and samples and less real instruments.

Trivia: it was scorching hot the day I decided to record this.  My studio must be like the hottest room in the whole apartment building too, so you can look close to see my tshirt and the blofeld keys are dripping wet with sweat.

I don’t know why you would want to know/look, but then isn’t the point of trivia is to be trivial?  *mind explosion*

I am making these latest songs totally on the Octatrack (the black sampler thing for non gearnerds still reading), and loving it.  Admittedly I’ve cursed it more than any machine I’ve owned, but in the end it is such a creative way to work. I’ll mix in Reaper, but try to do as much as possible in the sampler first. 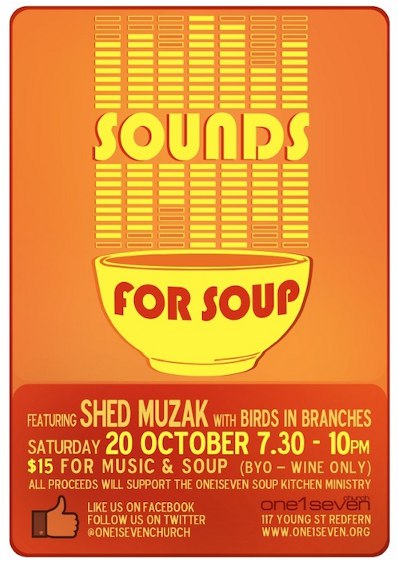 I’m playing a show!  A rare thing at the moment I know, so come if you can.
It’s a cool venue (our own church building) and I’m supporting a cool band, Shed Muzak.

And here is Nai in the promo vid.  Ain’t she pretty?

Well hello internet! I haven’t seen you since back….you know…..at that thing…. Anyway how have you been?!

Yes, yes I know. I’ve been a little light on the sharing of news lately.
I have been doing plenty, but in small incremental pieces that never quite triggered an update. My bad. I must learn to make small incremental posts. I must be more of a friend to you, internet, like you are to me. I will learn.

But here we are now. So here’s the catch up.
The biggest thing happening in the background has been preparing the live show.

I know my stuff can be a little hard to ‘crack’ at first, so I’ve decided that birds in branches needs a good live show, as kind of a ‘way in’ to grasp the songs. So I’m trying to learn to play my songs in such a way. It is slow and humble work, and I should again mention slow. But I’m making progress. I have built a new live rig called ‘Cumulus’, and have been turning and tuning my songs into different beasts – live beasts. You can see Cumulus in production mode up top.

I also have new songs and sounds and material in a queue of progress. The songs are (in my opinion) getting more vivid, and my sound is getting larger. Some are not so far from some live testing and teasers already, and I am pretty excited about that.

And last of all, our home just moved, and with it, the home studio. Good or bad? GOOD. The new home studio is possibly the best sounding room I’ve ever had access to. Plus in contrast to the last room, this one is further away from Nai attempting to sleep. Much further. So I’m looking forward to stepping things up again. I have already done a few late nights, like old times. I have some extra gear and sound treatment coming to make the most of it’s potential, then I dream of locking myself in there like a crazy hermit. Here is the new space, waiting for the new pieces to arrive.

Now you may be asking yourself how you missed my shows this year. Don’t beat yourself up, you didn’t. I didn’t play any. Well, any public ones.
But that is ready to change. I’ll post the details soon, just keep the 20th of October free.

Ok so there is a fair bit of catching up. But it’s OK. Fear not. I’ll come back with more detail and casually engaging rhetoric because I’ve returned to communication. I am back.

I have made a remix. Of a band I have loved for a long while.

Here is the birds in branches version of Switchfoot’s Afterlife:

I rather like remixing. It’s a lot like making a normal song, with the bonus that I don’t have to listen to my own voice 1000000000 times. That is a lot of times to listen to one’s own voice. Remixing is cool because it is not so bad when it is Jon Foreman’s voice. Not so bad at all.

Switchfoot are a band worth keeping eyes on in my opinion. If you don’t know them, or stopped paying attention after their smash album, may I humbly suggest they have grown continually even better. Listen and/or listen again.

Also, this remix does happen to be an entrant in a contest. If you are reading this before the 27th March 2012, I would totally let you vote for mine here. It may win me a prize – some UE in-ear monitors. Something I am currently saving up for, but not very close to affording. I wish all prizes in all contests were that great.

That is all for now, just worked a loooong day job day with much driving. I’ll be staring into space for a while. Good eve.

Part of me always dreamed of being in a boardsport video.  I remember paying $40 and more to import short VHS videos of cool riders as a younger lad.

Sadly, I am enthusiastically mediocre at surfing, snowboarding and skating.  So that dream was a stretch.

BUT that isn’t the only way to a video.  To my great delight, hear me in the two videos shot for the ‘Australian Open of Surfing’ held recently.  It’s a real honour, actually.